skip to main | skip to sidebar

Everything is right with the world

I was up at the Doomstead today, to do a bit of preparation and preposition some stuff for future work.

The builder has finished his bit of the build and fixed the defects.


On the way out, I saw some feral jonquils 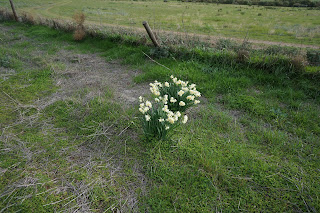 and an echidna! A real live wild fucken echidna! I've never seen one before in my life and I was so stoked. 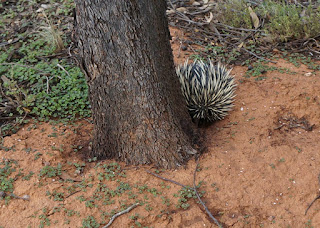 Posted by David Irving (no relation) at 22:26 No comments:

A few minor speed humps along the way

The builder didn't manage to finish his part of the build due to bad weather. (I don't know about you, but I wouldn't want to be wrestling with a 6 metre length of roofing iron in sideways rain. He's been on another job for the last couple of weeks, but will get back to mine next week.

There are also a few defects which need to be fixed before I start laying bales, as they'd be impossible to fix afterwards.

Anyway, here are the latest photos.

The builder has the roof on, and the electrician has made a start. I'm going up on Monday, and there will be photos.

Posted by David Irving (no relation) at 21:22 No comments:

There has been serious progress on the Doomstead

The builder started on the frame this week, and has made great progress. 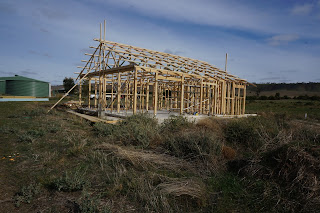 This is the view from the north east. 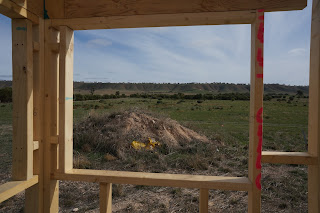 Here's the view from the ghost of the kitchen sink. (The pile of dirt will go.)

I'm stoked. The frame, wet area cladding, and roof should be done in another couple of weeks at the most, then I can start laying the bales.
Posted by David Irving (no relation) at 18:36 No comments:

The builder will be starting on the frame and roof next week, and reckons it will be up by the end of May. I've also just taken delivery of the straw bales, which are taking up one bay of my shed, so I'll be able to start on the walls as soon as the builder has finished.

It's finally happening!
Posted by David Irving (no relation) at 07:18 1 comment:

I had a site meeting with the builder yesterday. Depending on the availability of straw bales, we may be able to restart construction in early April. There are a few preparatory jobs we can get done in the mean time. I need to get a small shed up with a concreted floor for the batteries, inverter, generator, etc, and there are a couple of minor problems with the slab which can be easily fixed.

The place is looking great - surprisingly green for this time of year because of the rain we had the other day. I saw a brown snake sunning himself (until he spotted me and slithered away), and a hare.

More later, when I find out about the bales.

Update: Bale Dude rang back, and he has bales available, which he can deliver in mid-April. Huzzah!

Update to update:  The builder had a few delays, and other work. Quote finally delivered, and he's hoping to start at the beginning of May.
Posted by David Irving (no relation) at 12:36 No comments:

I got up to the Doomstead at about 10, which is pretty good for a bloke who's on holiday (especially as it's really 9), and tried to start the tractor. Flat battery. Trying to jump start it off the ute just about set my jumper leads on fire, but didn't actually help. I need new jumper leads, btw.

So, I made a quick trip to the local garage with the battery to see if he could charge it. It was going to take most of the day so, to avoid wasting the trip up (and all that fuel), I bought a new one. He had a pallet of bargains for $120, which isn't too bad.

The tractor started, so I began playing agricultural equipment Tetris to get to the slasher. When I tried to back up to drop the first bit of stuff off to one side, I found one brake was jammed on, and I couldn't reverse. (Other wheel spinning, which is alarming on a tractor.)

At first it looked like the footplate was pressing on the brake mechanism, because most of its bolts had fallen out. (Yeah, yeah, I fail at routine maintenance.) Once I had the plate off, and looked a bit closer, it was still jammed. Now, I've never adjusted the brake, and it worked fine last time I used it, but it was certainly adjusted too tight. It was a bitch to adjust, because the adjusting and lock nuts had been painted in place, but I got there in the end.

I've managed to slash the larger half of the paddock (yes, yes, I know), which is probably all I would've done anyway, and now I'm home, clean and fucked. Everything hurts.
Posted by David Irving (no relation) at 12:43 3 comments:

Who would've thought a harmless vanity project like this would need one? It seems it does.

Comments are to be on topic, or at least interesting, and not deliberately offensive.

Of interest (at least to me)