skip to main | skip to sidebar

Has it been nearly a year?

Well, yes it has.

I still haven't managed to get the fox, unfortunately. I've only seen him once since I bought the shotgun, and I couldn't get it up quick enough to shoot the bastard before he ducked behind some trees. And he has been eating the quail - there were hardly any of them escaping from under the slasher last time I mowed.

Still, all-in-all the health of the paddock is pretty good - I've got clumps of trees and saltbush scattered over it,  and there's a lot of grasses and other short plants as well, including some lucerne that Chris and I broadcast-seeded a couple of years ago. 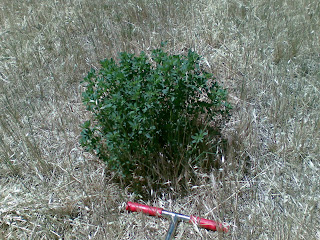 The thing in the foreground is the handle of my Hamilton tree-planter, to give some scale: it's about a foot long. 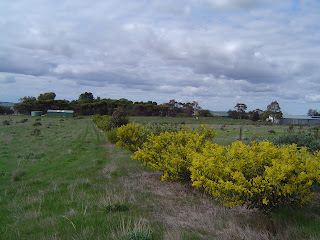 The paddock is no longer quite that green.


I recently bought a second-hand post hole auger, which was really hard to attach to the tractor, and I still haven't worked out how I'm going to store the thing other than on the tractor itself. I think I need some kind of gantry in the shed. After Chris and I spent a day playing agricultural equipment Tetris, I've got everything under cover (the slasher spent a couple of weeks out in the weather). Having sons has turned out to be handy ...

So, the next steps are to find a contractor to put the slab in before the building approval runs out in May, and get some fencing organised. I need to fence in the micro-forest and the windbreaks, and along the creek line, and also divide the paddock into 5 or 6 bits, of a bit over a hectare each, so I can cell graze when I finally put some sheep on it. That's actually not as critical as the rest, especially as too much fencing will make building the Hovel trickier, but I need to at least plan where the fences will go eventually.

Who would've thought a harmless vanity project like this would need one? It seems it does.

Comments are to be on topic, or at least interesting, and not deliberately offensive.

Of interest (at least to me)